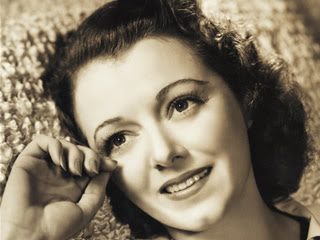 For a decade, she was one of Hollywood’s highest-paid actors. In the seventy years since she retired from the limelight, however, Janet Gaynor’s legacy has been overshadowed by the work of her collaborators, her contemporaries, and especially her two best directors: F.W. Murnau and Frank Borzage, both of them visual stylists of the highest caliber. The very characteristics that endeared her to audiences—her delicate charm, and an innocence seemingly out of place with the Jazz Age that created her—may also provide clues as to why she has gone overlooked and underappreciated in the annals of film history. Her wholesome image doesn’t fit the loose girdles and looser morals of Pre-Code Hollywood that modern audiences are eating up these days. However, two screenings last year—a three-day matinee run of Borzage’s Street Angel (1928) at the Museum of Modern Art as part of their Auteurist History of Film series, and a weeklong residency of Murnau’s Sunrise (1927) in a new 35mm print at Film Forum—reminded us of Gaynor’s reticent grace, and how integral her performance was to both of these masterpieces of the silent screen. 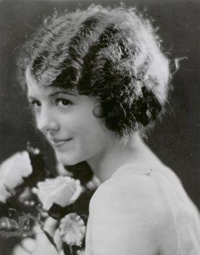 The Hollywood of the Roaring Twenties was the capital of elegance, extravagance, and excess. Olive Thomas’ mysterious death in Paris in 1920 left behind suggestions of suicide, STDs, and debauchery; 1921 saw the arrest of beloved comedian Fatty Arbuckle, accused rape and murder; 1922 opened with the still-unsolved murder of director William Desmond Taylor; and it was only 18 days into January of 1923 when Wallace Reid died, exposing a history of morphine addiction and alcoholism. Theda Bara was vamping up the screen, Clara Bow and her bobbed hair were all a-wiggle, and a host of other glamour girls paraded about, draped in jewels and furs, and sipping martinis with their pinkies extended.

Into this gaudy zoo walked Janet Gaynor, whose deceptively simple and natural acting and down-to-earth persona put her at odds with the cultural zeitgeist. Born Laura Gainor in 1906, she and her sister began working as extras in short films soon after graduating high school. A watchful producer pulled the renamed “Janet Gaynor” out from the background in 1926. One year and several forgotten (and presumably lost) films later, she found herself in the hands of Hollywood’s greatest import: legendary German director F.W. Murnau, whose Nosferatu (1922) and The Last Laugh (1924) were already world-famous for their striking and evocative visual innovations. 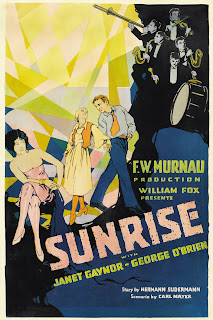 Murnau was lured across the Atlantic with the promise of an unprecedented carte blanche from studio head William Fox, and he took full advantage of this opportunity. Sunrise is one of those rare miracles in which the near-limitless technical capabilities of the Hollywood studios converged perfectly with the ambitious, personal, and unrelenting vision of a director. Deliberately artificial sets and expressionistic lighting transform pastoral landscapes into paranoid, nightmarish dreamscapes through which Murnau’s mobile camera lurks like a phantom. Murnau’s direction is anticipatory: at times he uses long shots to shadow characters’ movements through alleys and swamps, while at others the camera remains immobile, awaiting with anxiety and dread the action it knows will come. Though it was only a minor hit when first released, the ensuing eight decades have seen mountains of praise piled upon it—and Sunrise continues to more than live up to everything that has been said about it. (Plus, who doesn’t love the drunk pig sequence?) 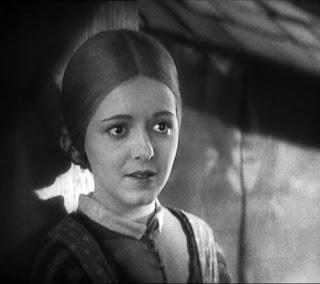 Its fable-like story concerns nameless characters in highly symbolic settings: the Country and the City. Janet Gaynor plays The Wife, who husband (The Man, played by George O’Brien) has recently taken up with The Woman From the City (Margaret Livingston). Though Sunrise is based on a story by Hermann Sudermann, it’s hard not to notice the shades of Theodore Dreiser’s An American Tragedy, published just two years prior in 1925. While George O’Brien—with his lumbering walk, his body literally weighted down with surmounting guilt (he also wore leaden shoes to emphasize this)—is more showy, Gaynor’s performance is more reserved and nuanced. Her disquieting demeanor is introverted where O’Brien is extroverted, and though she is the casualty of her husband’s wayward attractions, she never plays the victim.

It’s easy to forget that such a demanding role was placed on a 21-year-old actress who had never faced a starring role this challenging before. Playing against type, Gaynor wears a garish, but wonderful, artificial wig—replacing her natural brunette curls with homely, pulled-back blonde hair—that makes her seem more like a grandmother than a young bride. She looks old beyond her years, with a weariness and vulnerability that Gaynor manages to pull off. 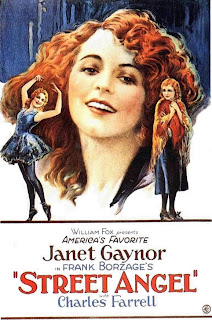 The premiere of Sunrise was delayed to accommodate the shooting and release of Borzage’s Seventh Heaven (1927), a love-conquers-all story about a transcendent romance between Gaynor, alone and abandoned in the gutter, and Charles Farrell, the street cleaner who rescues her and brings her up to his seventh floor home. While the influence of Murnau could definitely be felt in Seventh Heaven, it was even more prevalent in Borzage’s follow-up, Street Angel, the second and best partnering between the director and Hollywood’s newest love-team of Gaynor and Farrell (who would go to on to pair -up in a total of 12 feature films). Borzage’s camera stalks the alleys of Naples (recreated on the Fox studio’s backlot), at first following Gaynor’s panic-stricken flight as she escapes from the police after being arrested for stealing and “solicitation” (it was to help her sick mother, forgive the girl!); later it follows itinerant artist Farrell after he discovers Gaynor’s hidden past, giving up his career and descending into the crowded gutter from which they originally fled. 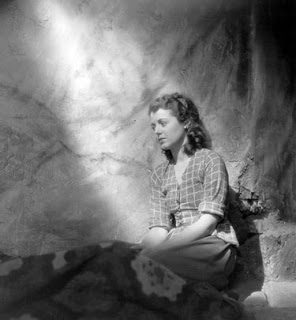 Gaynor’s youthful enthusiasm and endurance, absent from in Sunrise, reappears in Street Angel. Her attempts to woo men like so many other prostitutes is a perceptive bit of physical comedy, while her flight through the streets is thick with anxiety. Plus, it’s hard not to be won over by her cherub cheeks and optimistic smile.

Visually, Borzage (along with cinematographer Ernest Palmer and set designer Harry Oliver) seem to push the limits of cinema past their boundaries. The frequent tracking shots and long- takes scream for a use of deep focus that wouldn’t be technologically possible for several years to come; so, the film has to suffice with the occasional cross-fade in order to keep the shot in proper focus. Still, those looking to see the heights of backlot artistry under the decided influence of German Expressionism need look no further than Street Angel: it’s a dizzying, shadowy world of desperation, betrayal, and—in true Borzage fashion—a romance that can purify even the dingiest gutter. 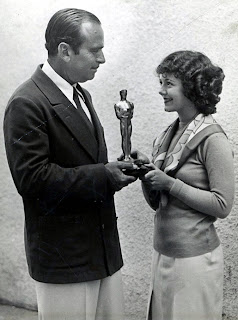 At the first Academy Awards in 1928, Gaynor was awarded the Best Actress Oscar for all three of her performances in all three of Sunrise, Seventh Heaven, and Street Angel. (That’s something that has never happened ever since.) Her career would continue to rise with Borzage’s Lucky Star (1929), much of which is a two-person chamber drama with crippled veteran Farrell, and which is only marred by a magical, redemptive closing that goes too far in search of a happy ending. (A 1928 reunion with Murnau, 4 Devils, is sadly lost—the possibilities of its greatness are damn tempting, however.) Though her paycheck increased, Gaynor wasn’t happy with her choice of roles, many of which were restricted to naive ingénues in musicals, much to her dismay. Fed up with her career, she left Fox until the studio agreed to meet her demands.

However, when Gaynor returned, the studios didn’t meet their end of the bargain. Her career continued as usual, with Gaynor being assigned roles that seemed like rehashes of Mary Pickford’s forever-young, spunky juveniles. When Shirley Temple effectively took that spot in the mid 1930s, studios lost faith in Gaynor, until she was cast in William A. Wellman’s A Star Is Born (1937), which garnered her another Oscar nomination. Here, she plays an aspiring actress whose ascent parallels the demise of her mentor (Fredric March), a drunken actor in the midst of his own fatal fall-from-grace. While she still plays the good girl, she brings an unadorned dignity to the role. Her ability to hold back the drama in a story that seemingly aches for emotion is what makes the film hold up so well today (and the same can be said for March’s performance, as well). 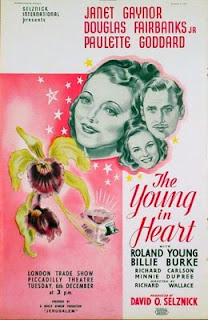 After The Young in Heart in 1939 (in which she plays a con-artist with a heart of gold, another role in which she gets to exercise her knack for sophisticated comedy), Gaynor retired from the screen to be with her fashion designer hubby Adrian. For a while the couple moved to Brazil and, according to a Films in Review profile by John Nangle, ran a coffee plantation. She made a few TV appearances in the 1950s, as well as a return to the big screen to play Pat Boone’s mother in Bernadine (1957), and even a stage appearance in a theatrical version of Harold and Maude in the early 1980s—but these were just kicks for Janet. Her acting career had ended decades earlier. Regrettably, the studios had decided her career was over long before either she or her fans thought it was. The three movies she made with Frank Borzage, and the one existing film with F.W. Murnau, however, are reminders of not only Janet Gaynor’s potential, but also the heights she reached.

[This article originally appeared in The L Magazine on April 1, 2010]
Posted by Cullen Gallagher at 5:49 PM

Cullen Gallagher
Cullen Gallagher is a Brooklyn-based writer, musician, and curator whose work has appeared in The Los Angeles Review of Books, The Paris Review, The Life Sentence, Moving Image Source, Bright Lights Film Journal, Beat to a Pulp, NoirCon, Crimefactory, Film Comment, The L Magazine, The Brooklyn Rail, Fandor, Not Coming to a Theater Near You, Hammer to Nail, Spinetingler, Between Lavas, Reverse Shot, and Guitar Review.